What is a Chantry Chapel?

Chapels inside cathedrals and parish churches are like little mini-churches, with their own altars and seating, but what are they for and why were they created? Some are dedicated to particular saints, like Lady Chapels dedicated to the Virgin Mary, while others were set up by local organisations like craft guilds, such as the Mariners Chapel which was once here at Hull. But many of these were originally created as chantry chapels, private places for prayer for the souls of the wealthy dead. Hull had a fine example in the Alcock chapel which was once near where the south porch is now.

A chantry was literally a payment for chant, a place where a priest would be employed to chant, recite or sing the Mass (the service now known in the Church of England as Holy Communion) over and over again, day after day specifically to benefit the person paying. It was believed that the more Masses that were said for someone’s soul, the quicker they would escape the ‘lesser hell’ or Purgatory, where most souls went to be purified before going up to heaven. The doctrine of Purgatory was invented by the medieval church as a way of explaining how the souls of most people, who were neither holy enough to go straight to heaven, nor evil enough to go straight to hell, could be ‘cleansed’ after death through a lesser purifying fire to burn away their sins and make it possible for them to be found pure on the Day of Judgement.

The souls of most people in a parish who had died within living memory would be remembered once a year at the Mass on All Souls Day (2nd Nov) when their name would be read out from a long list. If they could afford a memorial, the incised or painted request to ‘ora pro anima mea’ (pray for my soul) could also be of benefit, because if someone saw it or read it that ‘counted’. But this desire to accrue benefits quickly became big business for the church. The rich were able to pay not only for prime burial sites near the high altar where their mortal remains could be physically close to every Mass being celebrated, but they could go one step further and pay the salary of a priest to say the Mass repeatedly just for them. Many of these were said at altars set up around the church, often placed against pillars, and some were collaborative affairs, that is several ‘chantries’ being added together to pay for a priest full-time. But the really wealthy could pay for private chapels to be built where the Mass could be celebrated in more style and elaborate tombs could be built so the dead donor could be physically present at the Mass.

Sometimes money was left for a certain number of Masses to be said within a fixed period (something of a Mass-marathon! There are examples of payments for a million masses to be said, effectively many lifetimes, or for a thousand masses in a year), sometimes it was an endowment ‘in perpetuity’, which allowed for later family members to be added to the benefit as well as the founder and his or her ancestors. It was quite mercenary - once the money ran out, the Masses stopped - and the whole system was dismantled in 1541 when the Doctrine of Purgatory and therefore the chantries fell victim to the more extreme Protestant Reformation of King Edward VI (1537-1553). The chanting stopped and the chapels were either dismantled or converted to other uses.

The chantry priests were called 'priests of the table'. By the early 15th century, there were twelve of them. John Gregg, who also founded a chantry and almshouse, gave them a row of twelve houses at the west end of the Churchyard (what is now King Street) to live in and keep them near their workplace. Although this does not survive in Hull, we can see a similar priests' row at Our Lady's Row in Goodramgate, York, built c 1316 at the end of the churchyard of Holy Trinity, Goodramgate. Dr John Riplingham, rector of St Martin's Vintry, London, paid for two priests to say Mass for himself, his parents, and all Christian souls.

Several of the chantries were associated with 'hospitals' – almshouses for the elderly, poor or infirm. The residents were expected to pray for the souls of the founders. For example, at Gregg's Hospital, they were expected to say at 6 a.m. and 6 p.m.: "fifteen paternosters [i.e. the Lord's Prayer], fifteen Ave Marias and three Credos for the founders' and all Christian souls".

The chantries at Holy Trinity were suppressed in 1548, the same year the statues and paintings from the altars were destroyed. John Leland had visited Hull just a few years before this, and in his Itinerary in England and Wales (part 1, p. 49), he identified these chantry chapels:

Rev. John Tickell, in his History of the Town and County of Kingston-upon-Hull (1798), and the Victoria County History tell us of more chantries, most of which used existing altars, rather than being separate chapel buildings:

A legacy of land and power
Read More 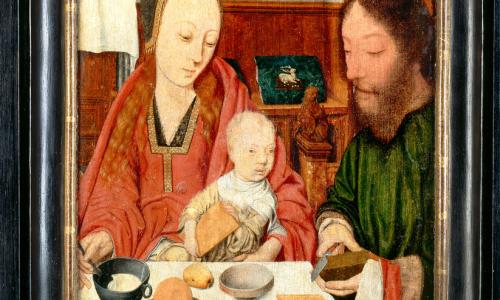 This painting of the Holy Family having a meal had hidden meanings, but what are they?
Read more...
Copyright © 2021-2023 Hull Minster
Admin login
Design by